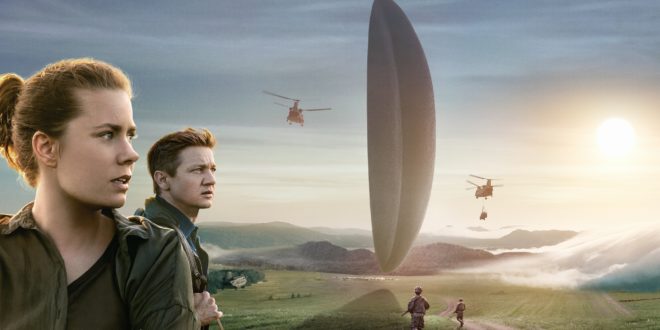 I wanna talk about the movie Arrival. Directed by the genius Dennis Villeneuve, it both left me in awe and confused. As all alien movies go, this one also started with the unknown objects making their arrival into earth’s atmosphere. But unlike every other alien movie, this one didn’t end in a big fire fight.

Dr. Louise Banks, a university teacher in linguistics is recruited by the US army to initiate the first contact with the alien species that visited the earth. Unlike what we’ve seen in Hollywood, you’ll probably need a linguistics expert than a jet fighter pilot for this. Dr. Banks is joined with an astrophysicist to enter the alien ship on selected schedules to attempt some sorts of communications with them.

Aboard the ship they face two fascinating octopus shaped creatures. The main mission is to get information from them in their communications. Why are they there? What is the purpose of their visit? Where are they from? In order to create communications in the Arrival, both sides need to understand each other. Dr. Banks follows a great approach trying to analyze their language in order to understand them. Abott and Costello (what they named the aliens) seem to be cooperative is well. All this happens in peace while all over the world governments are panicking and the whole world is in chaos.

Arrival, is unquestionably a modern masterpiece. The fact is that its director, Denis Villeneuve, seems to be making nothing but masterpieces of lately.

It is an anti-war film on a cosmic scale, an intimate portrait of loss – and hope, and a powerful reminder that when we are together, we are better. There’s only a handful of these movies that would make you kinda hate humanity. For me, it was the moment when Dr. Banks asks Costello “where’s Abott?”, and Costello replies “Abott is death proccess”. This was due to a random sergeant placing explosives in the ship because he was freaked out by the things he saw on the tv. The way Costello told about Abott’s death, just broke my heart.

Learning their language, Louise realizes that the aliens aren’t a threat to humanity and earth. They are here to bless us with a gift. The gift they gave her to pass on, was their language. As it allows them to perceive time on a different level. Having learnt all of this, Louise uses this gift to avert a full on planetary war with the alien species.

Overall, it was a fantastic movie. I was just disappointed that I couldn’t see how humanity used their newly found power and why did the aliens needed the humans to learn their power.

Everything you expected from a movie nerd. Sit on the couch all day and watch movies.
Previous Cat tent from an old t-shirt, wire hangers, and a piece of cardboard
Next Logan | the last time we see Hugh Jackman as Wolverine + super bowl trailer