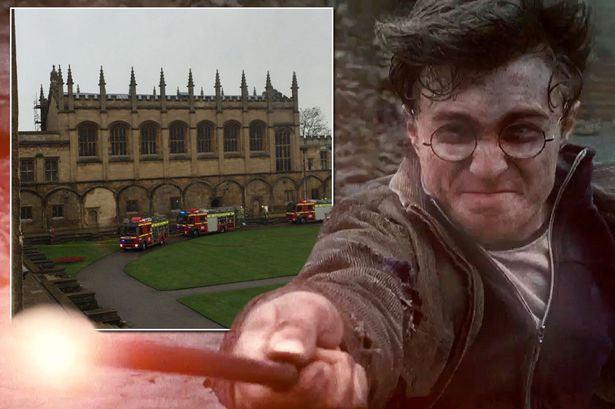 A fire in a building used in the Harry Potter films for shots of Hogwarts’ Great Hall has been put out, eyewitness have confirmed. At least three fire engines were at Christ Church’s Hall in Oxford University to contain the blaze, but it’s not yet clear how big the fire was, or if the Hall has extensive damage.

Professor Linda Woodhead was at the scene and tweeted a picture of the fire engines outside the building.

“Hogwarts hall on fire. Fire brigade still working on it.”

She later posted: “It’s under control now but seems to be a lot of smoke and water damage. A row of hot plates caught fire newly refurbished hall.”

It appears that no-one was hurt in the incident.

Another witness confirmed that the damage was “limited”. A statement from Oxfordshire County Council Fire and Rescue Service reads: “We were called to reports of a fire in the historic great hall in Christ Church College, St Aldates, Oxford at 1:05 pm on Saturday 12 November 2016.

“Four fire appliances from Abingdon, Kidlington, Rewley Road and Slade fire stations quickly attended the scene and were faced with a fire involving the hot plate area and smoke logging within the great hall.

“The swift actions of the college staff to evacuate the area and call the fire service, prevented a serious escalation of the fire in the great hall of the university building.

“The cause of the fire was found to be an electrical fault in the hot plate within the serving area of the Great Hall.”

Incident commander Paul Webster said “the quick thinking of the college staff, whose procedures ensured everyone was evacuated safely and the quick response from the fire and rescue service helped to reduce the impact of the fire on the premises and mitigated damage to the historic building.”

The grand stone stairway leading into the Hall was used in the wizarding franchise for shots of the entrance to Hogwarts.

Eventually, the filmmakers decided to recreate Christ Church’s Hall as a replica down in the London studios to make production easier.

Back in 2012, the Hall – along with Christ Church Cathedral and college complex – witnessed an explosion in the number of tourists visiting, which was credited to the Potter films.

The 16th Century buildings were visited by some 350,000 in the year previously, following the success of the franchise.

Dean of Christ Church Cathedral, the Very Reverend Christopher Lewis, told the BBC at the time that visitors were up by 50,000 a year, drawn by the beautiful settings that were brought to life by Daniel Radcliffe, Emma Watson and Rupert Grint.

Of the Hall, he said: “Its a very beautiful staircase – like many others – but of course it has the Harry Potter factor.”

We’ll have more on this as it happens.

I'm a creator. Anything from cooking, to furniture and tactical armors. Join me as I write just about anything you can imagine here.
Previous Pink reveals HUGE pregnancy bump in surprising Twitter post
Next Wallpapers & screenshots of overwatch