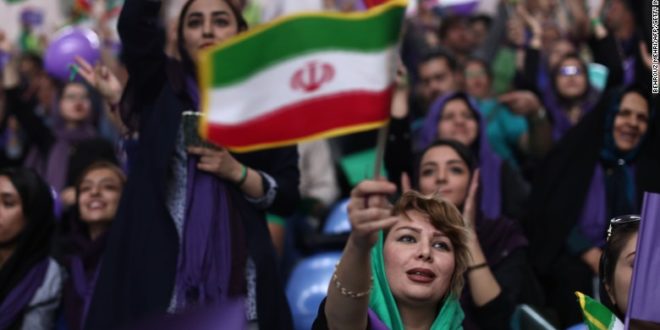 Last friday Iranian citizens from all over the world were experiencing stress as the presidential election was being held worldwide. This stress was caused by the fact that the two main candidates could lead the country to a very different path from each other.

Iran’s moderate President Hassan Rouhani trounced a hard-line challenger to secure re-election Saturday, saying his country seeks peace and friendship as it pursues a “path of coexistence and interaction with the world.”

Friday’s election was widely seen as a referendum on the 68-year-old cleric’s push for greater freedom at home and outreach to the wider world, which culminated in the completion of a landmark 2015 nuclear deal that hard-liners initially opposed. The nuclear deal won Iran relief from international sanctions in exchange for limits on its contested nuclear program. But Iran continues to suffer from high unemployment and a dearth of foreign investment, putting pressure on Rouhani to show he can do more to turn the sluggish economy around.

Although considered a moderate by Iranian standards, Rouhani was the favourite pick for those seeking more liberal reforms in the conservative Islamic Republic.

He appeared to embrace a more reform-minded role during the campaign as he openly criticized hard-liners and Iran’s powerful Revolutionary Guard, a paramilitary force involved in the war in Syria and the fight against the Islamic State group in neighbouring Iraq.

That gave hope to his supporters, who during recent campaign rallies called for the release of two reformist leaders of the 2009 Green Movement who remain under house arrest. The two figures, Mir Hossein Mousavi and Mahdi Karroubi, both endorsed Rouhani, as did Mohammad Khatami, another reformist who served as Iran’s president from 1997 to 2005. As night fell, tens of thousands of Rouhani backers celebrated by pouring into the streets of downtown Tehran, setting off fireworks and chanting in support of Mousavi.

Related :  Saffron and 10 things about this SPICE

Many wore ribbons of Rouhani’s colour purple as well as green in support of the opposition leaders under house arrest.? Rouhani was first elected in 2013 with nearly 51 per cent of the vote.

Cliff Kupchan, chairman of the Eurasia Group, said the landslide win gives Rouhani a mandate he lacked in his first term.

“Though he’ll remain a centrist, Rouhani will be more aggressive in pursuing reforms,” he predicted, though he cautioned the path would not be easy.

I'm a creator. Anything from cooking, to furniture and tactical armors. Join me as I write just about anything you can imagine here.
Previous Powers Boothe dead: Agents of S.H.I.E.L.D. actor passes away aged 68
Next 3 easy ways to get rid of ants