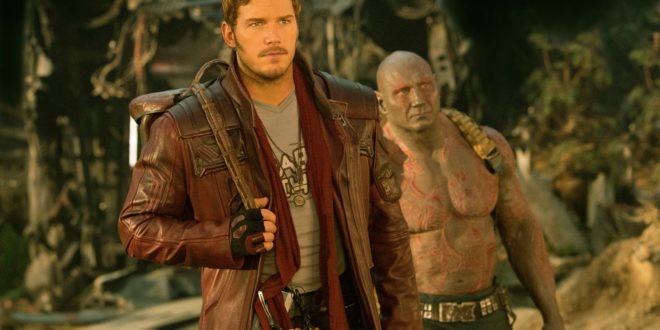 The first Guardians of the Galaxy film (2014) was a fun and fresh approach to the Marvel Universe that we hadn’t seen before, and the sequel was a chance to build upon that originality. Instead of raising the bar, Guardians 2 fell way, way short of the mark in almost all aspects. Essentially, the viewers were given a recycled rendition of the first film with a slower second act.
The storyline of Guardians 2 has interesting similarities to Star Wars Episodes V & VI. The group is separated for most of the film. Peter (Pratt) is discovering that his father (Russell) is alive just as Luke Skywalker’s father is revealed to him at the end of Empire. The other half of the group, Rocket (Cooper), Baby Groot (Diesel) and Yondu (Rooker) are imprisoned by Taserface, just as Han, Chewbacca and Leia are being held by Jabba the Hut.

Guardians of the Galaxy

Somehow, these paralleling plotlines are far less impactful in Guardians 2 than they are in Star Wars, and the reason for this is because the Guardians storyline is rushed. As slow as the second act is, it still doesn’t afford Peter the time to develop love for his father. When the twist is revealed to Peter, he has no reservations about turning on Ego because their relationship isn’t established. Star Wars is powerful because Luke seeks reconciliation with Vader and not only refuses to kill him, he refuses to believe that Vader is pure evil. Peter kills his father just like he would any other creature with a bounty after learning of his evil, and shows no remorse after doing so.
There was a secondary relationship in Guardians 2 that was told excellently, but took a backstage to the battle between Peter and Ego. This is the struggle between Gamora (Saldana) and her sister, Nebula (Gillian). This was a storyline I kept wanting more of, and it wasn’t at all because it ended positively. It was because the audience had been able to see their relationship progression and regression since the first movie. We know they hate each other, but we see the hate is spawned from their upbringing. Each character is given time to fully process their emotions on screen, therefore the audience has a better connection with them.
Guardians 2 compromises some much needed character development in exchange for jokes and extra screen time for Drax and Baby Groot. It was a funny film, but the story suffers, and ultimately makes this much anticipated sequel a mild disapiontment.
Related :  Miss Peregrine’s Home for Peculiar Children review
Share

Everything you expected from a movie nerd. Sit on the couch all day and watch movies.
Previous 5 Top Rated Romantic Getaways in Wisconsin
Next The WannaCry Ransomware Has Link to Suspected North Korean Hackers