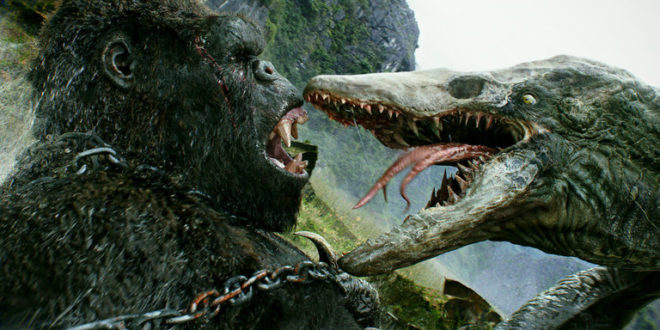 What movie has Loki, Captain Marvel, Nick fury, Doctor Doom, and Corpsman Dey, but it’s not a Marvel movie? Yup, it’s Kong: Skull Island. The only thing that was left out from this movie was a clever Stan Lee cameo. I know I’m 3 months late on writing about this, it just took me so long to watch it and try to find words to describe it. As a kid that grew up watching this kind of monster movies late at night, I really do appreciate all these reboots with a much better visual effects. But let’s face the facts. King Kong 2005 was actually pretty awesome, so there was no reason to reboot it. The main reason they remade the “Kong” and made it so much bigger is because of the future plans they have for him. Just as we all wanted, there’s going to be Godzilla vs. Kong movie (finally!!). As of 5 hours ago it was announced Adam Wingard the most recent Bliar Witch director will be directing this epic battle.

As for the movie itself, in the department of taking you to a new and strange world of terrifying creatures, it didn’t do as well as the 2005 version. Watching the monster scenes in the 2005 version would scare the shit of you and excite you, but in the new film you might as well just say “meh”! The visual effects were really good, and they did deliver us a beautiful tropical landscapes, but in some parts, it was just like watching an animation.

The most disappointing part of Kong: Skull Island was actually Brie Larson. Brie Larson to Kong Was what Rihanna was to Battleship. Full of unnecessary one-liners and slow-mos  trying to make her role seem important. I love Brie, but honey, they could remove her character from the movie and nothing would change. She literally had no impact on the movie. Except for standing next to Tom Hiddleston and looking cute AF!!!

Honest to go the only part of the movie I enjoyed was the after credits scene. It gave us a peak at the next movie(s) that includes possible epic battles between Kong, Godzilla, and other fantastic monsters from the old movies.

Everything you expected from a movie nerd. Sit on the couch all day and watch movies.
Previous The map that tells you when everyone is going to die
Next Where Do Ants Go at Night?