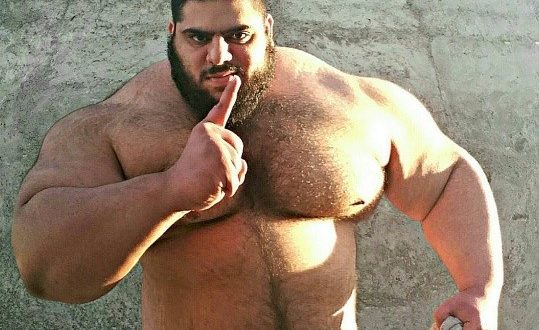 The Persian Hercules who knows as Iranian Hulk ! just have a look at these pictures to understand why his nickname is Iranian Hulk.

Gharibi (The Iranian Hulk) has become a popular figure among Iranians after he started posting Instagram pics and video clips of himself lifting weights.

The massive 24-year-old powerlifter can reportedly lift a whopping 386 lbs — more than his own bodyweight. That’s pretty impressive seeing as a baby elephant typically weighs just over half that mass: about 200 lbs.

Iran is an Islamic republic on the Persian Gulf with historical sites dating to the Persian Empire. Extensive marble ruins mark Persepolis, the empire’s capital founded by Darius I in the 6th century B.C. The modern capital, Tehran, is home to opulent Golestan Palace, seat of the Qajar Dynasty (1794–1925), plus modern landmarks such as the 435m-high Milad Tower.

I am an entrepreneur and internet marketer from Middle East. Born 1985, Graduated in Industrial Engineering & Marketing . Interested in Web designing and E-commerce, E-Marketing and Management issues.
Previous Top selected funny memes of May 2017 pumpkeen.com
Next Turkish Airways provides in-flight laptop computers after US, UK ban laptop computers on board